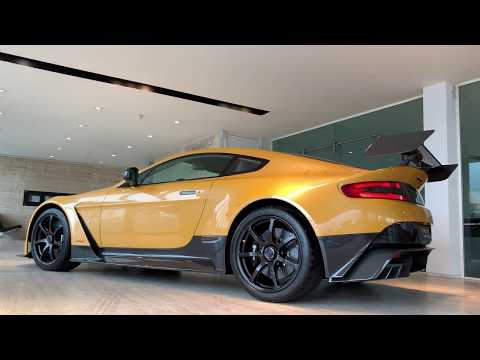 *FOR CARS OVER TWO YEARS OLD. **LIMITED PERIOD WILL APPLY, RATES MAY VARY.

Vantage represents the ultimate in luxury performance and British engineering.

Since 2005 Vantage has been in production at Gaydon in a range of V8 and V12 model variations. After it was first unveiled, Vantage has continued to advance thanks to continued developments in power, performance and technology, making it a much-loved model in the Aston Martin line up.

The V8 Vantage was launched in 2008 and has a front-mounted 4.7-litre engine that provides maximum torque of 470Nm at 5000rpm. The rear mid-mounted manual transmission (also available in Sportshift automated-manual transmission) supplies an appropriate level of thrust at all speeds. Putting the car into "Sport" mode provides even more front-wheel grip and rear-wheel traction allowing the vehicle to reach 0 - 60mph in 4.7 seconds.

The V8 Vantage also comes in Roadster, its soft top roof can be raised or lowered electronically in 18 seconds and can be done whilst driving, up to 30mph. The level of performance is almost entirely equal to that of the coupé and delivers the same maximum power of 420bhp at 7300rpm. Despite the extra weight, the acceleration and top speed are also identical; 0-60mph in 4.7 seconds and a top speed of 180mph.

The V8 Vantage S Coupé was introduced in 2011 with a revised version of the 4.7 litre V8, producing 430bhp power and 490Mn of torque (10bhp and 20Nm more than the standard 4.7 litre V8 Vantage). The performance of the S has been significantly improved with an increase in top speed from 180mph to 189mph and 0-60mph of under 4 seconds. Roadster edition equals the coupe performance figures, the soft-top roof opens and closes in 18 seconds at speeds of up to 30mph.

Vantage GT8 launched in April 2016 and was strictly limited to just 150 examples. It was the lightest and most powerful V8 Vantage ever made. With a super-sharp chassis tuned for track-focused agility, powered by a revised 440 bhp version of Aston Martin’s 4.7-litre V8 and available with a choice seven-speed Sportshift II paddle-shift transmission.

V12 Vantage features the manufacturer’s renowned 6.0-litre V12 engine and is available in both Coupé and a Roadster models. The two variants launched in 2009 are slightly different in terms of 0-62mph acceleration, reaching 4.2 seconds for the Coupé and 4.5 seconds for the Roadster and both reach a maximum speed of 190mph. The exterior styling of the V12 Vantage Coupé and Roadster is accompanied by greater comfort and practicality on the inside. Despite the car’s modest size, a 300-litre boot (with a foldaway parcel shelf) gives significantly more luggage space than most other performance cars.

The V12 Vantage S launched in 2013, benefits from enhanced performance from the 6.0-litre V12 engine. A more prominent spoiler, side sills and a new carbon fibre diffuser, emphases the car’s sporting credentials. 19" V-spoke wheels gives the S edition a lower, wider profile. The air intakes on the front bumper not only look powerful, they help the engine to achieve a maximum 430bhp, instead of the 420bhp possible in the first Vantage Coupé. A seven-speed transmission, altered suspension and numerous other engineering tweaks allow the vehicle to reach speeds to up to 205mph (compared to 190mph for the V12 Vantage). V12 Vantage S Roadster takes Aston Martin convertible performance to a new level. Headline figures include a top speed of 201mph, or 195mph with the convertible roof down.

Vantage GT12 is a special edition model with production limited to just 100 vehicles in 2015, featuring race-inspired technology, reduced weight, a broader track and radical aerodynamics. Its dampers and springs have been uprated with a choice of Normal, Sport and Track drive settings. Its 6.0 litre V12 engine generates up to 600PS in acceleration while lightweight materials shaves the weight down by 100kg, compared with the V12 Vantage S. Transmission is an automated manual Sportshift III, delivering 0-60mph in 3.5 seconds and outright top speed at 185mph.

New Vantage launched in 2017 is built with a high powered 4.0 litre twin-turbocharged V8 engine, which provides impressive acceleration of 0-62 mph in 3.6 seconds and achieves a speed of up to 195 mph.

Suited to the race track, winding country roads or the everyday commute, a used Vantage is an Aston Martin of outstanding class. The result is a supercar that perfectly balances acceleration with handling.

Back
Compare Saved Vehicles
Top
Close
Your Cookie Settings
Select your cookie settings
Strictly Necessary Strictly Necessary cookies are essential to let you move around the website and use its features, such as accessing secure areas, shopping baskets and online billing. These cookies allow our website to provide services at your request.
Performance Performance cookies collect information about how you use our website e.g. which pages you visit most often, and if you experience any error messages. They also allow us to update our website to improve performance and tailor it to your preferences. These cookies do not collect any information that could identify you - all the information collected is anonymous. They will not be used to target adverts to you on other websites.
Functional Functionality cookies are used to remember the choices you make, e.g. your user name, log in details and language preferences. They also remember any customisations you make to the website to give you enhanced, more personal features.
Targeting Targeting cookies collect information about your browsing habits to deliver adverts which are more relevant to you and your interests. They also measure the effectiveness of advertising campaigns.
Save Settings
Cancel Changes