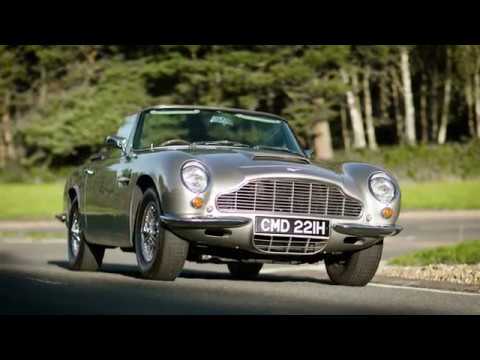 - Delivered new to London with RHD steering but destined for immediate export from the UK
- Originally finished in Silver Birch paint with black Connolly leather interior
- Believed to have covered just under 30,000 miles from new
- Converted to the more desirable 5-speed manual transmission in 1992
- A delight to drive with factory-fitted power steering and power folding roof
- Supplied with a one year Aston Martin warranty

Detailed History
This beautiful and rare Aston Martin DB6 Mk2 Volante was manufactured in January 1970 and delivered new in RHD configuration to a respected spy novelist, who lived in London SE1. The car had been specified with Silver Birch paintwork and black Connolly leather interior, along with automatic transmission (which was latterly changed to manual). It is noted that the owner specified the car for export, and although it is unknown which country the car was taken, it was re-registered in the UK in December 1981.

After its arrival back in England, the Volante was enjoyed by a small number of owners before arriving with a gentleman in Maidstone, Kent in May 1990, by which time it was painted in a pale metallic red. In a letter he wrote to a dealer based near the Epsom Downs Racecourse in Surrey in August 1992, he expressed that when he acquired the car the odometer recorded around 27,800 miles, which his mechanic was confident was all the Aston Martin had covered from new as he had known it for some time. He also stated he had covered only about 300 miles during his first year of use and then not driven the car, adding he had the speedometer and transmission changed during that first year, presumably exchanging the automatic gearbox for the manual unit now fitted.

The dealer sold the DB6 in August 1992 to a new owner and AMOC member in Knutsford, Cheshire, and according to an expired MOT certificate on file the odometer recorded just three miles at this time. During their fifteen years
Exterior Colour silver
Interior Trim black
Mileage 30,000 miles
Transmission Manual
Registered 1970

Hood colour black
Roof colour black
Aston Martin Newport Pagnell
Aston Martin Newport Pagnell, Tickford Street, Newport Pagnell, Buckinghamshire, MK16 9AN United Kingdom
+44 (0) 1908 610 620 +44 (0) 1908 610 620
View All Dealer Stock
Back
Compare Saved Vehicles
Top
Close
Your Cookie Settings
Select your cookie settings
Strictly Necessary Strictly Necessary cookies are essential to let you move around the website and use its features, such as accessing secure areas, shopping baskets and online billing. These cookies allow our website to provide services at your request.
Performance Performance cookies collect information about how you use our website e.g. which pages you visit most often, and if you experience any error messages. They also allow us to update our website to improve performance and tailor it to your preferences. These cookies do not collect any information that could identify you - all the information collected is anonymous. They will not be used to target adverts to you on other websites.
Functional Functionality cookies are used to remember the choices you make, e.g. your user name, log in details and language preferences. They also remember any customisations you make to the website to give you enhanced, more personal features.
Targeting Targeting cookies collect information about your browsing habits to deliver adverts which are more relevant to you and your interests. They also measure the effectiveness of advertising campaigns.
Save Settings
Cancel Changes