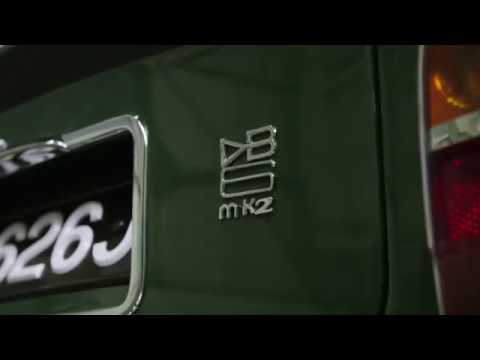 - One of only 71 DB6 Mk2's equipped with the Vantage engine by the factory when new
- Seemingly always a cherished example with several AMOC Concours successes in the 1970's and 1980's
- Finished in a beautiful colour combination of British Racing Green paint and Natural leather
- An original factory Manual transmission example, the car retains its matching numbers Vantage engine
- Significant recent recommissioning by Aston Martin Works including an overhaul of the engine
- Supplied with a one-year Aston Martin warranty

Detailed History
This lovely DB6 Mk2 Vantage was manufactured in April 1970 and records show it was sold by HR Owen in London and registered in September 1970. The car was supplied by the factory with the Vantage engine and manual transmission options (power assisted steering was standard on the MkII's), as well as a body colour in Burnt Almond and an interior in Natural leather.

It seems the car remained a cherished example throughout its life as the Aston Martin Owners Club (AMOC) Register notes the car had several club concours successes in 1979, 1985, and 1986. Although it is unknown when the car adopted the lovely shade of British Racing Green it wears today, we imagine it was a regular at AMOC events and competed in many concours events over the years, in addition to the events at which it was awarded a prize.

More recently, the DB6 was acquired in August 1997 by an Aston Martin Owners Club member who resided near Birmingham, and they retained the car for thirteen years until its most recent owner acquired it directly from them in May 2010. Soon after purchase, the Vantage was exported to the Middle East where it joined their significant car collection and remained on display in their storage.

Upon the cars return to England in 2018, Aston Martin Works have carried out a significant recommissioning of the mechanicals, including an overhaul of the original (matching numbers) Vantage
Exterior Colour green
Interior Trim tan
Mileage 38,101 miles
Transmission Manual
Registered 1970

Hood colour green
Roof colour green
Aston Martin Newport Pagnell
Aston Martin Newport Pagnell, Tickford Street, Newport Pagnell, Buckinghamshire, MK16 9AN United Kingdom
+44 (0) 1908 610 620 +44 (0) 1908 610 620
View All Dealer Stock
Back
Compare Saved Vehicles
Top
Close
Your Cookie Settings
Select your cookie settings
Strictly Necessary Strictly Necessary cookies are essential to let you move around the website and use its features, such as accessing secure areas, shopping baskets and online billing. These cookies allow our website to provide services at your request.
Performance Performance cookies collect information about how you use our website e.g. which pages you visit most often, and if you experience any error messages. They also allow us to update our website to improve performance and tailor it to your preferences. These cookies do not collect any information that could identify you - all the information collected is anonymous. They will not be used to target adverts to you on other websites.
Functional Functionality cookies are used to remember the choices you make, e.g. your user name, log in details and language preferences. They also remember any customisations you make to the website to give you enhanced, more personal features.
Targeting Targeting cookies collect information about your browsing habits to deliver adverts which are more relevant to you and your interests. They also measure the effectiveness of advertising campaigns.
Save Settings
Cancel Changes